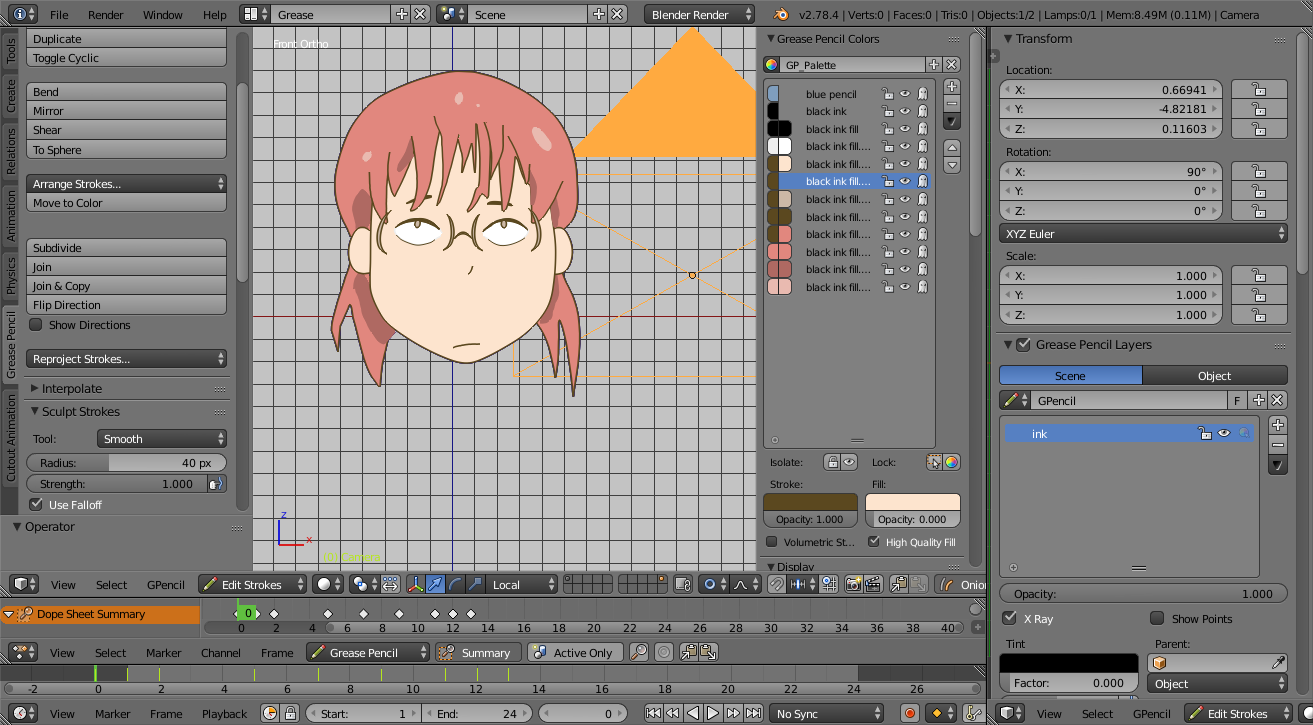 One teensy weensy workaround is the fact that there CAN be a GP datablock that's linked to an OBJECT coexisting with a GP block linked to the SCENE. But it's a bit of a kludge that limits the realtime combining of multiple GP "objects" (datablocks) to two, which is, of course, a bit rediculous. After all, in practice, you probably want to construct complex objects and later merge or join them together.

Point is, you want to organize your work in logical groupings that can be creatively mixed and matched. On the face of it, GP does not really allow this.

Or does it...? Well, it turns out the following rules can be used creatively - just remember that when you are cutting and pasting GP strokes, you have to be in edit mode in both the source and destination and you should use COPY (CTL+C) not CUT (CTL+X) because if you but, Blender will report that there is no buffer to paste from..

What does this all mean? It means you can create characters - or pieces of characters - in separate GP datablocks, scenes, or even blend files and combine them as needed. Yes, it's true that ideally you would click on a GP stroke and magically blender would show you all the layers associated with that character, right? Well, you can't have that, but you CAN keep all the layers associated with one character separate from other characters in the same scene as long as you use a sensible naming convention for your layers.

In practice, I would argue that for anything less than trivial scenes, naming conventions and data organizing ALWAYS becomes important, so you might as well get used to having to scroll through GP layers. Same with palette colors.

If any of this bothers you, then go try animating with OpenToonz. It's super cool in some ways, but again, once you get past the most trivial projects, the data management aspect gets unweildy pretty quick and blender's ability to simply parent GP layers to empties or armatures makes working with complex rigs or dealing with your 2D characters in a 3D space MUCH easier by comparison.

Also, if you want to avoid some of this complexity, remember you can always "bake" a complex character to a still image and just map it to a plane and that becomes part of your character's rig.

UPDATE : Wrong, wrong, wrong! Actually, if you have a GP datablock associated to an object, then importing (appending) that object from another blend file imports the associated GP data blocks as well. They are "part" of the imported object! And parented GP layers ARE correctly parented on import. That's a big boon for object reuse.

Just as importantly, you can import multiple objects in a single import. So if you have a complex character you can bring in the whole rig in one swoop. Just remember that while you can have a bunch of layers linked to various blender objects, all the grease pencil layers should be part of the same datablock or else you will only be able to see one piece of your character at a time. In fact, carrying this a bit further, if your GP datablock is associated with an object, then it will disappear whenever you click another object, so in practice the best procedure is to import your linked objects, one of which has GP data / layers connected to it, then immediately link the GP data block to the scene and delete it from the object.

Let me restate this because it is confusing :

How to Connect with Blended Planet Pictures :

In a hurry to reach me?